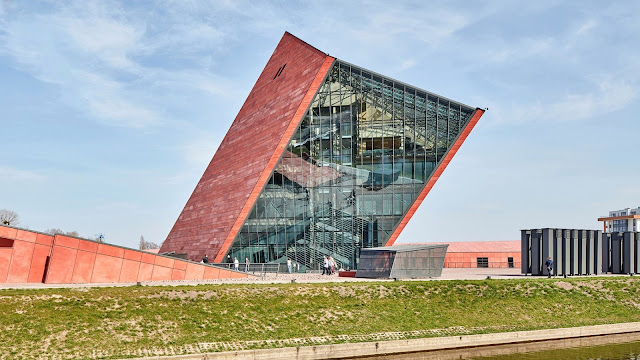 An angled tower wrapped in red concrete panels and glazing contains the entrance to this second world war museum, which is mostly housed beneath the surface of a public plaza in the Polish city of Gdansk. 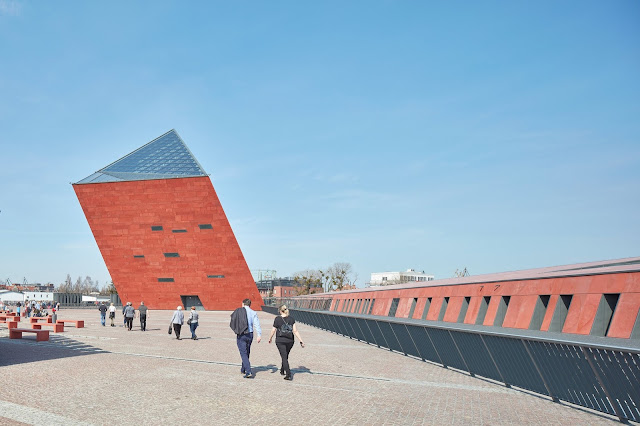 A jury headed by Daniel Libeskind awarded Studio Architektoniczne Kwadrat the project for the Museum of the Second World War following an international competition in 2010.

The studio, which is based in the nearby town of Gdynia, said it put forward a proposal that was "a bit risky", but also "something unusual, very distinctive and memorable". 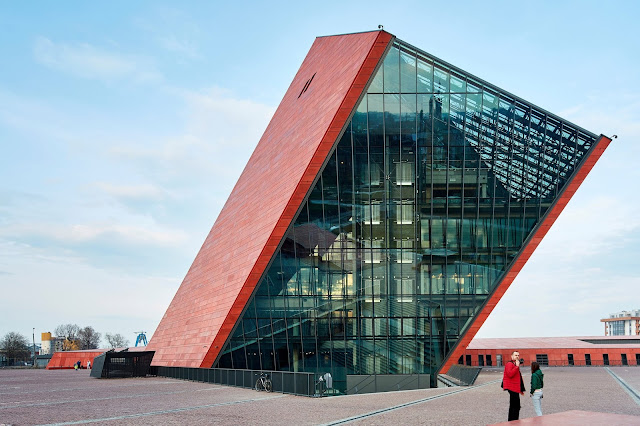 A tower rising 40.5 metres above the new public square provides the dominant feature of the building, which is located next to a canal in a district called Wiadrownia that was destroyed during fighting in 1945.

"The idea behind [the design] is simple enough," said the architects, "to position the main part of the museum underground so as not to completely use up the small plot of land intended for investment."

"We have concealed the other functions in a sculptural form. In this way, it was possible to find space for a vast square, and the whole premise became symbolic." 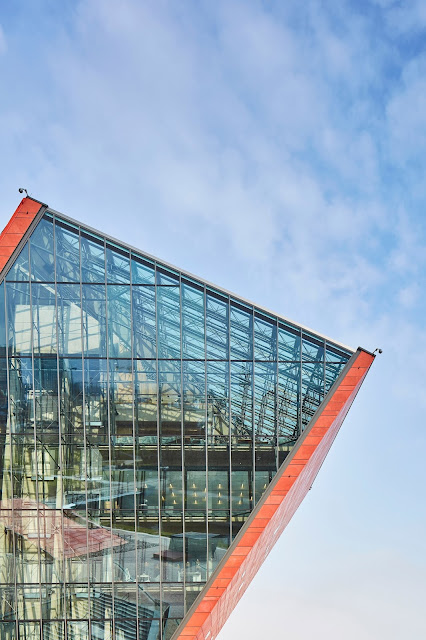 The project comprises three distinct but connected parts, with the underground spaces dedicated to the past, the plaza representing the present, and the tower symbolising the future.

The monolithic tower features surfaces set at angles as much as 45 degrees from the vertical, lending it a dynamic appearance that alters when viewed from different directions. 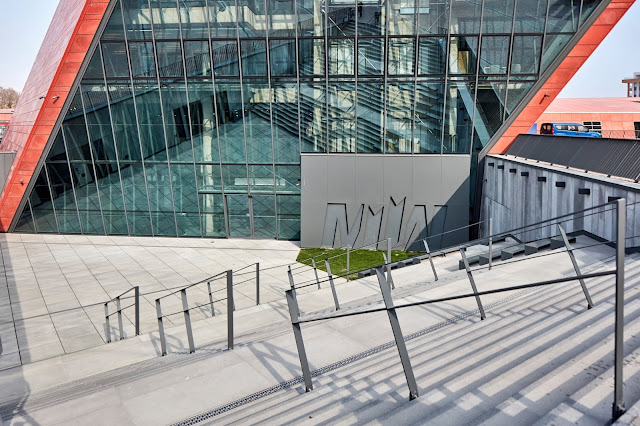 Three of its four trapezoidal facades are clad in terracotta-red panels, while the fourth side and kinked roof are filled in with glazing that allows natural light to flood into the interior.

"This simple sculptural form, devoid of literal meaning, evokes various associations," said the architects. "It has already been likened to a bastion, a barrier, a crumbling house or a bunker, and when illuminated at night, it resembles a burning candle."

"At the same time, it fits in with the city image and the geometry of shipyard cranes – the symbol of the port of Gdansk." 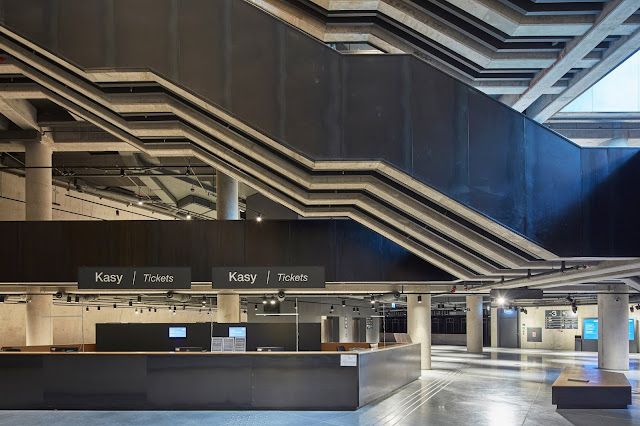 The glazed facade of the tower incorporates an entrance at its base, which is situated at basement level and is reached by a wide set of steps leading down from the plaza.

The tower contains a library, lecture halls and a restaurant with a viewpoint looking out across the city skyline. 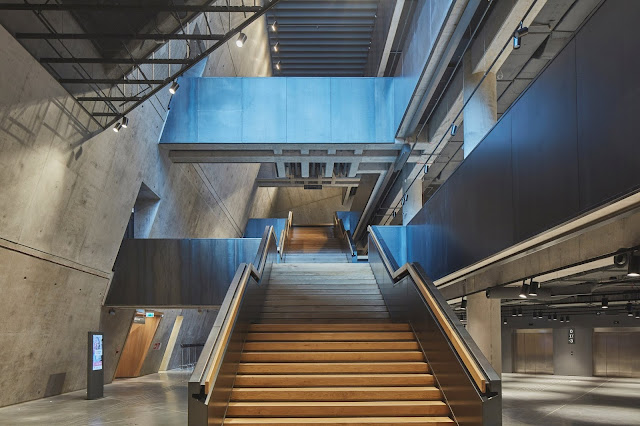 The majority of the 23,000-square-metre building is located beneath the paved public square, which aims to provide people with a place to meet, socialise and relax.

Staircases descend from the entrance through a large void to the level of the ticket office, cloakroom and exhibition spaces dedicated to telling the story of the war in Poland. 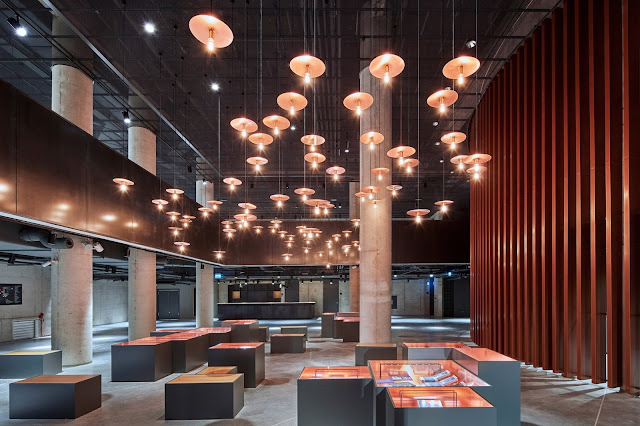 A corridor with a narrow skylight at its apex guides visitors through a series of austere exhibition rooms featuring a palette of concrete, steel and oak details.

In addition to digital displays and physical exhibits, the spaces include several recreations of places such as a pre-war shopping street, ruined buildings surrounding a Soviet tank, and the interior of a Warsaw apartment reflecting different stages of the conflict. 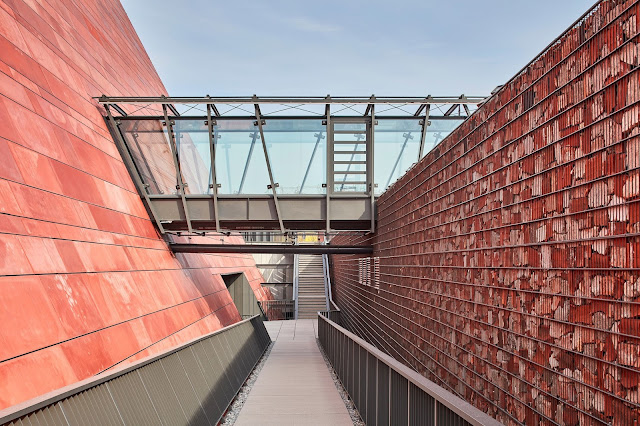 At the level of the plaza, a bridge connects the tower with a long, narrow volume containing offices. A walkway that passes beneath the bridge is lined with gabion cages filled with red brick and rubble from Gdansk. 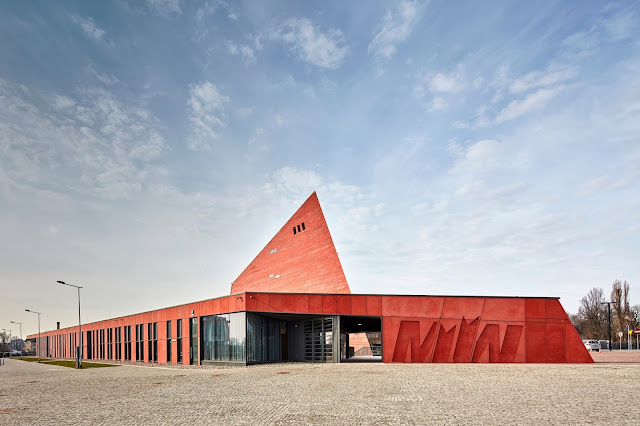 A further wedge-shaped structure that emerges from the square contains the entrance to an underground parking garage. Both this volume and the offices are clad in the same red tiles as the tower to create a consistent aesthetic across the museum's different spaces.